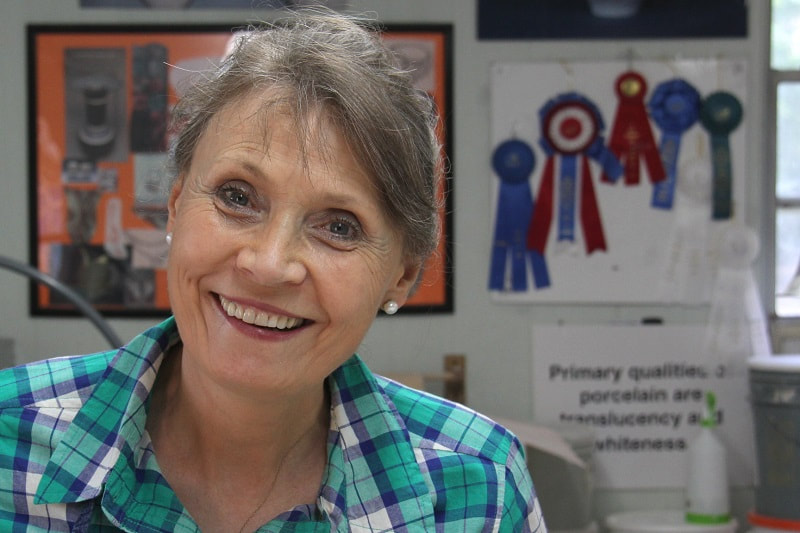 Antoinette was born in Johannesburg South Africa, but raised in Namibia, a semi-desert part of Southern Africa. While studying in Potchefstroom, South Africa she met her husband, Koos. They raised 3 beautiful daughters and her pottery career started in 1981 when she took a basic pottery class.

In 1995 Antoinette took part in her first exhibitions and it was during this year that she won the award for non-functional pottery in the Association of Potters, Northern Transvaal annual competition. Since then she had several opportunities to show her work in different galleries and museums across South Africa.

The Silver Jubilee exhibition featured South African award winning ceramic artists in 1998 during the 25th anniversary of APSA Southern Africa and she was fortunate to partake in this prestigious event.

A year later, in 1999 she, along with her family moved to Mississippi in the United States and she found herself without a studio to work in. Not allowed to earn an income, she traded her knowledge and expertise for working space in pottery studios around Northeast Mississippi. She trained several potters while working towards a green card for her and her family.

Antoinette exhibited in art galleries and museums and won awards on National and International levels in competitions during this time. Her pit fired work was accepted in several private and museum collections, including those of the Mississippi Museum of Art, Mississippi Craftsmens Guild, George and Laura Bush and Joan Bias.

In 2001 she obtained permanent residency for her and her family in the category “extraordinary ability in the field of ceramic”. For that she had to meet different artistic criteria, proving that her work is among the "top ten of ceramic artists in the country". She is now a citizen of the United States. She continued to participate in group and one man exhibitions including shows in Portugal and Japan. She partook in several fairs and festivals, including some top prestigious shows like the American Craft Exhibition in Chicago, Crafts America in West Palm Beach as well as American Craft Council shows.

Antoinette made a risky change in her career in 2005 when she changed from creating pit fired porcelain to translucent porcelain. It turned out to be a good decision; her work was accepted favorably in the arts community and her opportunities expanded. She pushed the limits with porcelain, while finding herself on the edge of new discoveries all the time. Since working with translucent porcelain, Antoinette found herself teaching and writing about the material and several of her articles were published in national and international ceramics magazines. She  wrote about and reviewed several other ceramic artists and ceramic shows.

While living just north of Chicago for a few years, she was, as always, inspired by nature and its rhythms and the influence of the snow shows in her white translucent porcelain creations.

Back in Mississippi since 2014, she and her husband Koos founded TeachinArt Online School of Art. They have a team of 10 instructors that present pottery, porcelain and other online courses to students in 42 countries in the world. These virtual pottery classes keep growing.

Antoinette built a reputation as porcelain instructor and teaches workshops abroad at least every 2 years.
Her book “Working with porcelain” was published in 2018 and she was honored with a membership at the International Academy of Ceramics in 2019.

During COVID 19, Antoinette had to postpone all her workshops. During the lock down period, she  resumed with her work in various ways. She continue with technical writing, video recording and created new sculpted work. She also continued to teach porcelain and pottery classes online. Two social distanced hands-on workshops and 1 demonstration was possible in Saltillo and New Orleans.
In July 2020 she was rewarded with one of the Mississippi Arts Commission's artist fellowships for individuals.
Despite the cancelation of the IAC-AIC congress in 2020, the New Members Exhibition was held in November and December 2020 at the Beijing Guozhong Ceramic Art Museum in China, where Antoinette has work included.

She will resume with workshops abroad starting in Italy at La Meridiana in May 2022.

More information about the artists